THE team @ THE salon

"Even as a child, I knew that I wanted to cut hair!"

Jen has been involved in the hair industry for more than 17 years.

What got her started?

Relates Jen with a laugh, "When I was younger, my mother would always take me to the hairdresser to get the same, super-short hairstyle. It was awful, and it always took 2-3 months to grow out – my classmates always used to tease me and say I looked like a boy! And when my hair grew out, we would go back for the same cut!!" It was then that Jen decided that when she was old enough, she would take matters into her own hands… and she did! Locally trained, she’s also done a course in San Diego.

Jen was awarded the prestigious Golden Scissors Award. What’s more, Jen also went on to be awarded the Overall Champion in the hair category that evening! In that same month, she also represented Singapore in an Asean Hair Competition in Korea, held in conjunction with a prestigious Hair Fair that was staged at their Indoor Stadium. Jen, together with Georgie Yam, also represented Singapore at the "World Hair Tour" hair show, held in Bangkok.

Every Saturday evening after work, you’re sure to find Jen winding down with friends and colleagues on the badminton court. 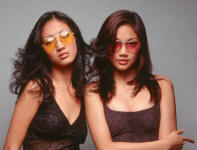